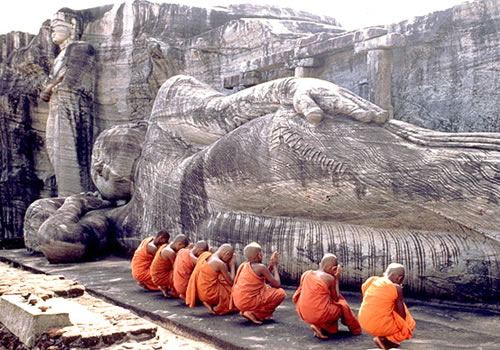 Being a multi-ethnic community Sri Lanka is home to many sacred sites. Sri Lanka is a Buddhist nation and most of the population is Buddhist while the second most commonly followed religion in the country is Hinduism. Therefore religious sites are predominantly Buddhist, but Sri Lanka also lays claim to some sacred sites that Hindu pilgrims flock to as well.

The Island is considered as the Spiritual heartland of Theravada Buddhism and the religion has been practiced in the country for over 2000 years, so most of the attractions that attract pilgrims and tourist to the Island are related to Buddhism.

It is believed that the Hindu religious practices were brought to Sri Lanka through the South Indians who invaded the country.   Shaivism was what was most practiced by these people in those days. It is also believed that many sites have been mentioned in the great Hindu epic ‘Ramayana’,  which tells the story of the Hindu God Rama who fought the demon king Ravana in Sri Lanka, in order to rescue his wife Sita.