You are here: Home › Destinations › › › Beaches of Sri Lanka 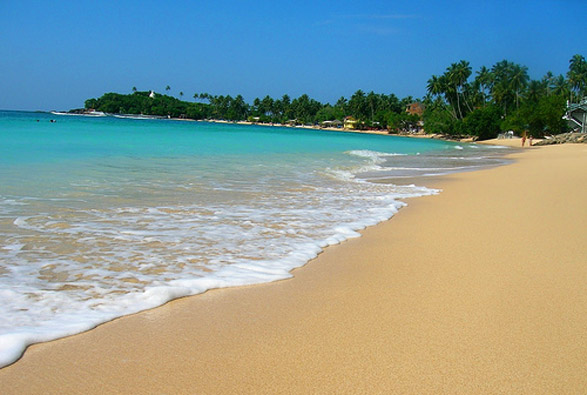 As a result of being nestled in the Indian ocean, the tiny island of Sri Lanka is blessed with beautiful beaches that are definitely some of the best in Asia, and in fact the Unawatuna beach situated in the south of the country has been mentioned in the list of ‘ Best beaches in the world’ which was released by CNN on the 1st of June 2013.
The palm fringed coastline stretches for over a thousand kilometers around the country, with stretches of long golden sandy beaches and crystal clear waters. Of these, the beaches in the South, East and West of the country are the most popular.
As Sri Lanka is a tropical country, the Island boasts of bright sunny weather almost all 365 days of the year!
Although sunbathing and sea bathing are most often the main lures, visitors are spoiled for choice when it comes to the many different activities that they can indulge in, ranging from snorkeling, scuba diving and surfing, to water sports and whale watching. Furthermore some excellent accommodation options ranging from cosy affordable guest houses to 5 star resort and boutique villas, are dotted along the entire coastal line of Sri Lanka.

The West Coast and Southern Beaches

The west coast starts from Kalpitiya in the north west of the country and stretches down to Colombo, while the stretch of beach from Wadduwa to Hikkaduwa (situated on the south west coast of the country) and the beautiful sun kissed beaches extending from Galle to Hambantota, are known as the southern beaches of the Island.

It is best to visit the west coast and the southern beaches from October to March.